Women’s Roles in the 1916 Easter Rising and After: A Reading and Conversation with Sinéad McCoole

Irish-American Crossroads is proud to present Sinéad McCoole. Irish historian, author, broadcaster, scriptwriter, and exhibition curator. As a curator, she has originated and collaborated on a number of important exhibitions on Irish history and Irish art both in Ireland and the US. Her areas of expertise include The Rising, the War of Independence, and Civil War, with an emphasis on the role of women. Sinéad is currently the Curatorial Advisor to Ireland’s 2016 Centenary Programme. 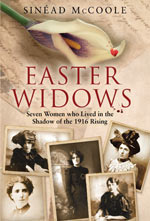 As an author, McCoole has published No Ordinary Women: Activists in the Revolutionary Years 1900-1923 and Hazel: a Life of Lady Lavery, as well as Easter Widows: 7 Women who Lived in the Shadow of the Easter Rising. She is currently director of the Jackie Clarke collection.

A special thanks to the Irish Government’s Department of Foreign Affairs for their support of the 1916 Easter Rising Centennial Commemoration Event Series.

Irish-American Crossroads is pleased to co-sponsor this event with Mechanics’ Institute and Humanities West.

Top photo by Fran Veale. Photo of families by Lensmen.

Don’t miss these other co-sponsored events:

Thursday, April 28, 7:00 pm, Voices of the Easter Rising 1916: A Theatrical Evening of Irish Poetry, Stories and Song expresses the passions of poets, protesters and activists in the quest for independence. See milibrary.org for details.

Friday, May 6-7, The Celts: History, Culture, Legend – a two-day symposium featuring history, art, music and literature about Celtic history beginning with pre-Roman Europe and including such topics as the Celtic language and culture, medieval Celtic storytelling, and contemporary Irish literature. For more information: www.humanitieswest.net.