The 13th Annual Irish-American Crossroads Festival is proud to present Grammy-award winning artist, Eileen Ivers and her band, in an electric night of music that will explore the influences of the Celtic tradition on American roots music. 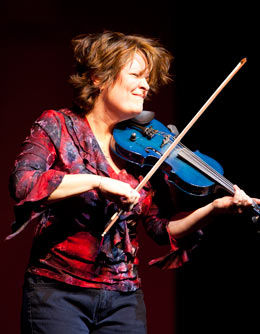 A musical pioneer, Ivers is hailed as “the Jimi Hendrix of the violin” (New York Times). Amid the fire of her fierce fiddle solos, the audience dives deeply into a musical journey as Ivers and her band mine the rich roots of American music. Their performance offers what the L.A. Times describes as “music with the kind of life and spirit that come together when talented artists from different backgrounds find the linkages that connect all forms of music…no wonder the audience loved every minute.”

This March 4th concert is also the launch of Ivers’ newest album, Beyond The Bog Road (on Ivers’ Musical Bridge imprint). The music from this album illuminates how Irish and Celtic influences enliven one of the richest cross-pollinations of folk music styles in the world, with a particular focus on Bluegrass, French Canadian, Cajun, Appalachian, and New Orleans musical traditions.

Eileen Ivers is beloved by audiences around the globe. She is Bronx born, a nine-time All-Ireland fiddle champion and an original musical star of Riverdance. While she is firmly rooted in traditional Irish music, Ivers is also celebrated as a musical pioneer. She has performed with Sting, Patti Smith, Hall & Oates, and symphonies, as well as for presidents and royalty, worldwide.

he Whelan-Kennelly Academy of Irish Dance will also be featured performers in this remarkable evening of music and dance.

Take a listen to the lead track called “Walk On” from Eileen’s album “Beyond The Bog Road”.  This album will be released on March 4th at our show in San Rafael!

Listen to Eileen Ivers’ description of the concert and invitation to join us on March 4th!

See Eileen Ivers perform a fiery version of the National Anthem at the Golden State Warriors “Irish Heritage Night”, January 27, 2016.  (Watch for the “surprise” at :48 seconds!)

San Francisco Giants Baseball Tickets: All attendees are invited to enter a free raffle to win a pair of tickets to the SF Giants “Irish Heritage Night” (April 25th) at A.T & T. Park, courtesy of the SF Giants.

A special thanks to our sponsors: Wheelcare Express and Ranger Pipelines, Inc.