Don’t miss this compelling series of three feature-length Irish documentary films addressing subjects such as Irish emigrant life, the legendary Irish poet William Butler Yeats, and one man’s extraordinary effort to diffuse ‘The Troubles’ in the North of Ireland.

8pm   How to Defuse a Bomb  > Purchase Tickets

The debut DocFest showcase explores the theme of the Irish journey and its variations with screenings of A Fanatic Heart by Bob Geldof, of the Boomtown Rats, Coming Home, the feature directorial debut of Dublin-based filmmaker, Cathal Kenna, and the headliner, How to Defuse a Bomb: The Project Children Story, produced by the award-winning Ed Stobart. 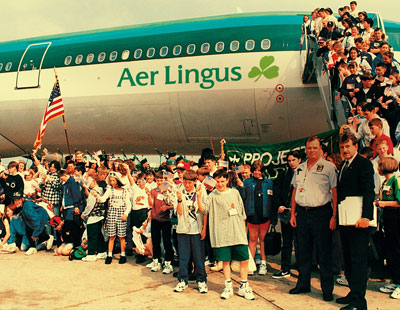 How to Defuse a Bomb

Recently screened at the United Nations Association Film Festival, How to Defuse a Bomb: The Project Children Story tells the story of Irish immigrant, Denis Mulcahy of the NYPD bomb squad, who, in 1975, gathered a group of family, friends, and neighbors to start a scheme offering children from Northern Ireland a chance to temporarily escape the violent turmoil of their daily lives. From these modest beginnings, Project Children brought over 20,000 Catholic and Protestant children to suburban America for summer-long visits where they forged unexpected friendships and found they had more in common with the “enemy” than they thought.

Meanwhile, A Fanatic Heart sees Geldof examine the life and works of the Nobel Prize-winning poet W.B. Yeats. With performances of his iconic poems by a number of well-known actors and artists such as Sting, Bono, Liam Neeson, Edna O’Brien, Anne Enright, Colin Farrell and Van Morrison to name but a few, the film traces the late poet’s early life through to his international fame and his role as Senator for the new Irish Free State.

Finally, the remarkable Coming Home tells the story of five Irish emigrants, who left their homes in search of work, opportunities, and a better life abroad. Following their journeys, the film offers an intimate portrayal of the experiences of Irish emigrants, the concept of home and what it means to different people. This screening will be hosted in community partnership with the Irish Immigration Pastoral Center.