The 8th Annual Irish-American Crossroads Festival was a tremendous success as we hosted an unprecedented lineup of events over a 21-day period. We proudly hosted eleven remarkable events showcasing an astoundingly broad array of voices from literature, music, dance, theater, and spoken word. These voices ranged from internationally award-winning musicians to those of men and women from our own local communities! It featured Irish-American literature and oral history as our particular focus.

In this unprecedented lineup of events, we highlighted oral history alongside the Irish-American literary tradition because we understand that the oral tradition is a foundation of Irish-American cultural expression. Through the events of this year’s Festival, we aimed to explore the unique arc of Irish-American literary history, and the link between the oral tradition and the written word. In addition, we were pleased to bring forward the voices of men and women who have participated in the newly launched Crossroads Irish Oral History Archive of the San Francisco Bay Area.

Grammy nominated fiddler and composer, Liz Carroll, opened the Irish-American Crossroads Festival with a rare solo appearance. Liz, a well-respected composer celebrated for invigorating the traditional styles of Irish music, is the recipient of numerous awards, including an Irish Traditional Musician of the Year award and a National Heritage Award. Her most recent album, Double Play, was nominated for a Grammy in 2010.

In addition to these accolades, Liz Carroll has won the TG4 “Traditional Composer of the Year Award” for 2011. She is the first Irish-American to receive this honor. 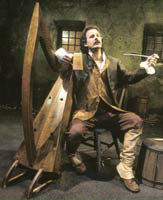 Patrick Ball, a premiere Celtic harp player and captivating storyteller in the Celtic tradition, told tales with a rhythmic charm that served up a feast for the mind of children. As an accompaniment to these tales, Patrick playted the Celtic harp and offered the children an introduction to this rare, legendary instrument, its music, its playing technique and its place in Irish culture and folklore.

Charles Fanning has written that an Irish-American voice can first be found in a broadside that appeared on the streets of New York in 1789. Wave upon wave of immigration from Ireland has continually influenced the literary voice of the Irish in America, always reflecting the energy of the newest arrivals as well as their efforts to adapt to this new land. Please join us for a lively conversation about the past and present importance of the Irish-American literary tradition.

A Reading and Conversation with Julian Gough

In his West Coast premiere, Julian Gough, born in London, raised in Ireland, and living in Berlin, read from his most recent book, Jude: Level 1 (2008), part of a hugely ambitious attempt to write the funniest serious novel of the new millennium. This reading will also explore how the arrival of a multicultural perspective in Ireland and Europe resembles the American experience. We invited discussion as to how this recognition affects the definition of Irish-American experience.

This event was moderated by the celebrated author, Yiyun Li, whose works of fiction have garnered such prizes as the Frank O’Connor International Short Story Award and the PEN/Hemingway Award, among many others. She was also named a MacArthur Foundation fellow in 2010.

Crossroads 2011 was proud to host this event, which was supported by Imagine Ireland, an initiative of Culture Ireland, and by A Public Space, an independent magazine giving voice to the twenty-first century.

Making it Home: Irish Immigrants of the 1950’s 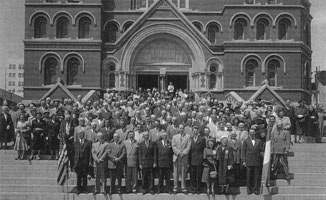 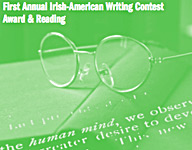 Irish-American Crossroads 2011 was proud to present the winners of the First Annual Irish-American Writing Contest in Memoir. The aim of this contest was to support and develop the voices of Irish-American writing.

This event celebrated the winners of the Memoir contest and provided an “open mic” opportunity for writers in the community to read from their memoirs (time limited, five minutes per person) about the meaning of an Irish-American heritage.

A special thanks to our review panel:

Audiences enjoyed a night of poetry and Irish hospitality to celebrate St. Patrick’s Day! Crossroads 2011 was proud to host a reading of some of the Bay Area’s finest poets.

Host: Katherine Hastings is the author of Fog & Light, Updraft, and Sidhe. She is the founder of the WordTemple Poetry Series in Sonoma County and the host of radio show WordTemple on the NPR affiliate, KRCB-FM. www.wordtemple.com

Irish Labor History in San Francisco: A Walking Tour along the Waterfront.

An intrepid group joined veteran City Guide tour guide, Peter O’Driscoll, along with historian and author, Lawrence H. Shoup, for a fascinating tour illuminating the history of San Francisco’s famed waterfront, with a particular focus on its Irish and Irish-American workers, leaders, and martyrs. The tour included the sculpture dedicated to the waterfront strikers of 1934 and other historic markers along the way. The tour ended inside Rincon Center discussing the historic murals dedicated to the labor movement in San Francisco.

Telling it at the Crossroads: Transforming Personal Stories into Theatre

Special thanks for support from the Irish Government’s Emigrant Support Programme (ESP).

Audiences enjoyed this unique opportunity to hear Patrick Ball, one of the world’s premiere Celtic harp players and a captivating spoken word artist, perform in concert in the sanctuary of St. Patrick’s Church. Patrick Ball is one of the premier Celtic harp players in the world. In playing the ancient, legendary brass-strung harp of Ireland with its crystalline, bell-like voice, and in performing marvelous tales of wit and enchantment, he not only brings new life to two cherished traditions, but blends them in concert to create “a richly theatrical and hauntingly beautiful performance.”